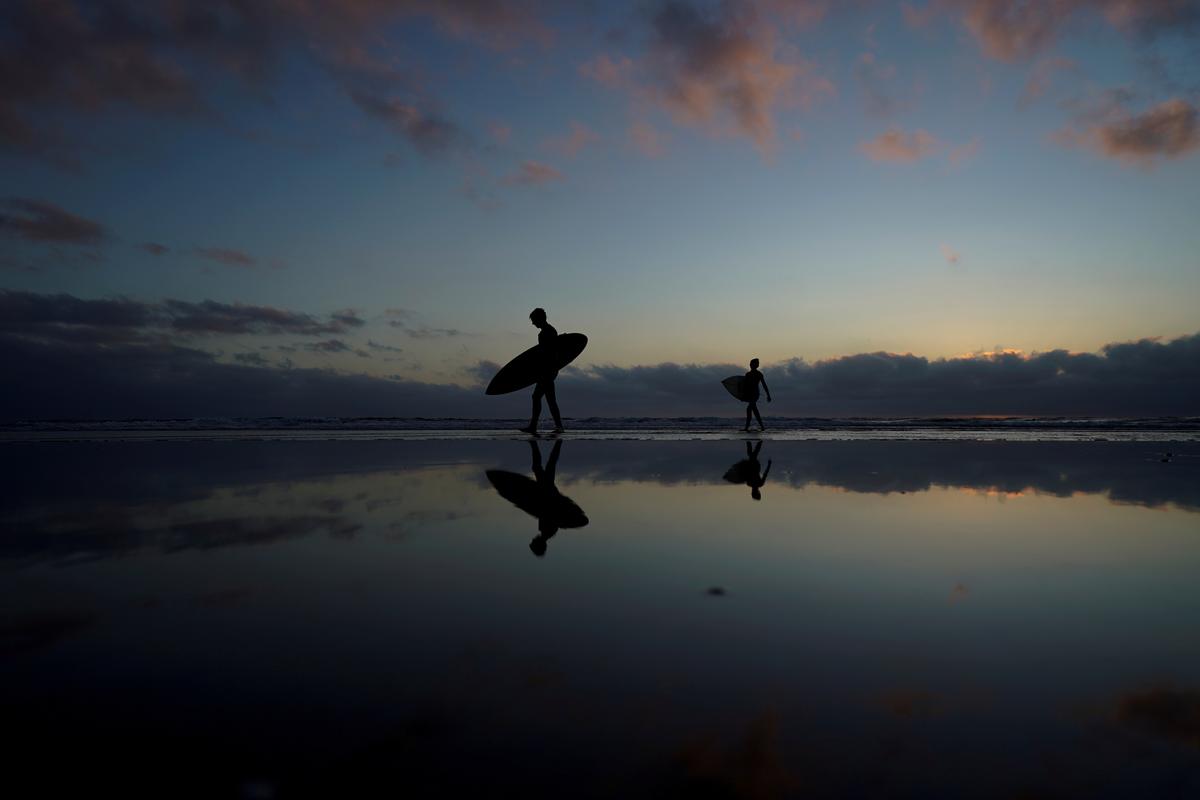 LONDON (Reuters) – Of all the sports at the Tokyo Olympics later this year none inhabit the frontline of climate change quite like surfing.

FILE PHOTO: A father and his son make their way in from surfing at Cardiff State Beach in Encinitas, California, U.S. October 17, 2019. REUTERS/Mike Blake/

Which is why when the wave sport makes its debut on Chiba’s Tsurigasaki Beach, there will be more than gold medals at stake.

As well as showcasing the world’s elite surfers to a brand new audience, International Surfing Association (ISA) president Fernando Aguerre says the goal will be to also highlight the growing threat to the planet’s oceans.

Surfers, he says, are the ambassadors of the oceans and the eyes of the world when it comes to the health of the seas.

“We are the guinea pigs of society when it comes to the what’s going on in the oceans,” Aguerre told Reuters by telephone from his home beach of Mar del Plata in Argentina, where the day before he took part in a huge litter sweep along some of the resort’s golden sands.

“We surfers, we live on the ocean, we literally submerge ourselves, we have ocean water into our ears, eyes and skin. In reality we are the perfect ambassadors of the ocean.

“We see the damage and degradation that is being done.”

While sewage and industrial pollution have long been a blight on the habitat of surfers, an existential threat is the predicted sea-level changes brought about by global warming.

According to a 2017 study by Dan Reineman of Stanford University’s School of Earth, Energy and Environmental Science faculty, 18% of California’s most popular surfing breaks could be drowned and 16% could deteriorate.

A Californian climate change assessment report in 2018 predicts two-thirds of the state’s southern beaches could be completely eroded by the end of the century.

With sea walls and housing preventing the natural movement inland of beaches, surfers will face the squeeze, even if predicted more frequent storms whip up large waves.

“But when it comes to the impact of climate change on our sport we don’t have a doubt about it. We see the diminishing fish, the impact of sewers, the industrial pollution, we see the erosion of the beaches and reefs.

“It’s a huge challenge. If the places where waves break change, some of the greatest surfing places might disappear.”

Aguerre, who made it his life’s work to introduce surfing to the Olympics, is not one to drown in gloom and describes himself as a “pro-active pessimist” when it comes to the threat the planet faces from man-made climate change.

“Optimists think everything will be okay, pessimists say there’s nothing we can do, we’re screwed, I think we are in trouble, but it’s not too late,” he said.

Aguerre believes the Olympic movement under Thomas Bach’s reign has woken up to sport’s responsibility to lead by example.

“Maybe 20 or 30 years ago the Olympic movement didn’t really care much about environmental problems,” he said.

“But with Bach nobody has a doubt that what happens to the earth and the environment happens to all of us, including athletes, not just Olympic athletes, it happens to everybody.

“The good thing is that surfing is going to have millions of eyes on it this year. That will give us power because people will see the passion for the ocean.

“I wake up every morning full of hope. The motto of the ISA is not all power to surfing. The motto is let’s have a better world for surfing. We believe surfing has a role to play.”

While surfing’s environmental impact at this year’s Games will be minimal, the likely choice of Tahiti to stage the Paris 2024 surfing events has raised some eyebrows.

Aguerre accepts the distance is ‘challenging’ but says taking surfing to its spiritual roots is the right decision.

“It’s the cradle of the sport,” he said. “We hold a Pro Tour event with more surfers there every year anyway, it’s not like we’re doing anything that has not been done before.”